Who would ever voluntarily ask to be taxed? One of our speakers at TEDxVienna 2022 On The Rise would – and does. But why? And why is this so important?

Marlene Engelhorn is a student of German Studies at the University of Vienna and – a future heiress to a multi-million sum. Three years ago, her grandmother, Traudl Engelhorn-Vechiatto, revealed her inheritance plans that include a double-digit million amount dedicated to Marlene. Since then, Engelhorn has been intensively involved with tax justice, the power of wealth taxes, and the democratic process that, in her opinion, has to lead the change. She is part of the international network “Millionaires for Humanity”, and together with like-minded people, she founded the initiative “Tax Me Now”.

I had the pleasure to interview Marlene after her TEDx Vienna talk and to talk to her about tax justice, the necessity of democratic processes when it comes to distribution of wealth, the importance of loud voices in our society, and meritocracy.

You are to inherit a large sum of money and you have decided to give 90% of that wealth away. Could you tell us more about how this money would be distributed?

I don’t have a perfect master plan and I can’t talk about things that aren’t ready. And I still hope that there will be a tax in place that I can then pay. It really has to be a democratic decision; it can’t be that I have to decide how to deal with a multi-million sum. You wouldn’t wander around the streets, walk up to a person and be like, “Here you go, have this multi-million sum. Go play.” You don’t do that – but this is exactly what happens when you inherit money. I don’t have expertise just because I was born rich. I think there are democratic ways of dealing with this – first with a public debate but then with taxation: this democratic way of getting money back into public pockets in order to create the public infrastructure that we all need.

How do you think things would develop in Austria if we started taxing big money and redistributing wealth democratically? Would we see instant changes?

Instant changes in politics do not happen – no, I think we first have to get started. We should not assume that one simple click will bring about a solution, that’s not how this works. I think solutionism is really for people who are too lazy to fight for stuff. It’s about the process really; we need a process where we talk about taxation in a completely different way, acknowledge the fact that this is a public and democratic way of spending money together for our own good – for all our good. Also, acknowledging that – since it affects everyone – everyone needs to be part of this decision making. That makes it messy and more complicated, but in the long run it will be more sustainable because we can then stand by it as a democratic public society. Also, the Austrian government isn’t exactly giving anybody much hope right now, as far as I can tell.

So, in previous interviews you’ve mentioned growing up enjoying privilege – can you pinpoint a moment that really set you along this path? Did something have a great impact on you?

No, because this would imply a paradox – I think Daniel Kahneman described it very well. Basically, what he says is, when we remember our lives, we pretend as if it was a logical chain of thoughts, connecting, and then one sets something off. But that doesn’t happen. What happens is you have a cloud of coincidences, all happening at the same time. It’s chaos – and in the present you never know what’s really a fact. You’ll only know in hindsight. And with me it was the same. It was a completely chaotic process that slowly merged into how I now act and advocate for tax justice. It’s the sum of all these different conversations that I had but that has nothing to do with just the privileged childhood, or one moment in particular. That’s not the case.

In previous interviews you have mentioned that two thirds of people want big money to be taxed – why do you think this still hasn’t been done yet?

The representation of our democracy is really lacking. I think in Austria, only one member of parliament has a working-class background, maybe two. That is not representative of our society where one in four people is working class. And I think we need to also accept the fact that just because somebody is in power and in government – yes, they have been elected, but that doesn’t mean that they are doing a good job, and it also doesn’t mean that they have the political will of doing what is democratically asked of them. Additionally, people like me who are really, really rich can influence governments and representatives through lobbying. We can use the backdoor to get the policies that we want, and most of us will, because that is just the status quo of things. So, we need transparency, we need political will, but we also need a public that makes their voice loud and clear and says, “We want tax justice, we want it now, and we want no compromise on that.” It is not fair that everybody has to pay taxes except wealthy folk. It makes no sense.

I have been talking to a few people about what you are advocating for and the main argument that keeps coming up is, “what if you take away from people who have worked hard for that money?” – what do you say to this and the persisting mindset of meritocracy?

Meritocracy is a lie that keeps the system alive. It is also degrading – we have a class system and on average, at least according to the German data that I know of, it takes six generations to get out of poverty. Just to get you out – it doesn’t get you anywhere near being rich. Six Generations. And that includes having to accumulate and pass on at least something. But the thing is, with wealth like mine, that’s not the result of work. My ancestors did not work their butts off alone. They might have worked a lot – that might be true and it’s okay to pay work well. But it doesn’t grant you a fortune on behalf of others who also worked well and didn’t see that much of it. Because who was producing whatever good it was? Or offering service? Who was in administration? Who was selling stuff? All these people, just because they don’t own the company, don’t get as much out of it. I think ownership alone is really no quality. And it’s a myth – you’re not self-made. Usually, you also need infrastructure in order to get anything. Who will teach your employees? Public education system, most likely. Who will treat them when they are ill? Public health care system, most likely. How do they get to work? Streets: who builds them? The state does. What about public transport? All of these things have been taken for granted when really, they also fuel these exceptional fortunes. Frankly, if it were true that hard work could make you rich, everybody would be rich. So many people work hard. But only so few are rich. I think that alone shows that meritocracy is a harmful lie told by people who have absolutely no idea what the status quo really looks like to 99% of the world.

How do other rich people/people who have inherited large sums of money usually react when you present your views on taxation and financial equality?

I’m in a bubble where people are in favor – they either advocate alongside me, like two of my colleagues in the media department at “Tax me now” who also do what I do, or they work in the background, or in whatever way they can. But that’s my bubble. I know some people do not agree but usually in a conversation, those rigid standpoints soften up a bit. Also, it’s not about convincing rich people to be taxed. Nobody gets asked whether they’d like to be taxed, and how. You will probably not be asked how you’d like your income-tax to look like. You just have to do it. You just accept it. And rich people should do the same. They should realize – “Just because I was born rich, it doesn’t mean I have to stay rich. I owe this to society”. Giving it back really is wonderful because somebody else is going to take care of the public infrastructure. It doesn’t have to be my duty to “save the world”. I probably would do a really bad job. This goes for anybody that inherits any kind of money, because this lonely-person-saviorism narrative is just rubbish. We need each other. We have chosen democracies, but we also need to re-democratize our ideas of money and how we use it. And I think that would be a very powerful and sustainable tool for any kind of decision-making for our future, that we also share. 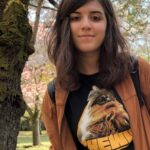