most people, probably, at some point in their lives

When it comes to societal beliefs that are as inaccurate as they are enduring, few are as widely embraced as the idea that people can be easily divided into two groups: the ones that are creative, and the ones that are not. It’s a notion that we adopt while young, and which ends up following us throughout adulthood, influencing not only the path we select for ourselves, but also the small choices that make up our day-to-day.

In modern culture, creativity has become somewhat of a mythical beast. A buzzword of the recent years, it’s something that many look for, and just as many swear they have never encountered.

Creativity is fickle. It’s reserved for the artists, for the writers, for the ones that possess that little something extra. For innovators, for entrepreneurs. Creativity is most definitely not something for the masses, nor something that everyone could access if they wanted to, is it?

Over the last few years, the answer to this question seems to have generated a collective feeling of surprise. Because no, everything is not as clear-cut as we’ve grown to believe.

Creativity is many things, but it is not unattainable. It is not a myth. It belongs to everyone.

The imaginary line between people that are creative and people who are not is just that – a fictive concept we would all be better off without.

In her 2015 book Big Magic, awarded author Elizabeth Gilbert makes a case for creativity not as an exclusive superpower, a gift of the select few, but as a living, breathing thing within all of us, a universally available tool that can be shaped and used to change lives for the better.

Wrapping one’s head around the idea that everyone is inherently creative might be hard, but in doing so, we just might stand to discover something great.

Creativity as a practice

The mind is a muscle. One with an incredible capacity to expand, to be shaped and reshaped. One that thrives with the right practices. According to not only Gilbert, but more and more artists and scientists alike, this is exactly what creativity is – something one can learn to practice.

Picture this: you sit down to work on a complicated equation. Except, you’ve never solved one before. You have no experience, no starting point. You wait for inspiration. It all becomes quite disappointing when you realize that, contrary to what romantic movies about suffering artists would have you believe, the breakthrough doesn’t just happen.

Except, it’s not. Ask anyone that would usually be labeled as creative, and what you’ll learn is that inspiration doesn’t just appear. Inspiration is trained, and as with most things, it actually comes with consistency. In Big Magic, Gilbert goes on to explain that, what many people mistake for (lacking) creativity, are the legendary bursts of inspiration that happen on TV much more than they actually do in real life. Because in real life, creativity is much less of a singular a-ha moment, and much more a series of deliberate, consistent choices. Much less inspiration, and much more practice.

Most people who believe they would never be able to incorporate creativity into their life because they never feel inspired end up being caught in a self-fulfilling prophecy. One will rarely feel inspired if one doesn’t take the time to invite it in over and over again.

That is why anyone is and can be creative. Because anyone can practice. And while inspiration might be avoiding us, it’s consistency that can lead to the most surprising of results.

There is hardly a thing that holds more weight in the creativity equation than the result. In too many ways, the human mind sees creativity as an outcome, something that can be measured by what is left at the of a process. And, well, it’s difficult to think of creativity as a practice that can become part of anyone’s daily routine when it’s so intrinsically tied to the imagined quality of what it can produce.

A significant number of experts, however, invite us to look at it from a completely different perspective. While there are many aspects to be considered, especially when taking into account the significance of (any type of) work in a capitalist society, one thing is clear: a writer is not made a writer by how many books they’ve published, nor is an artist one only after their work has been awarded multiple accolades. The definition does not lie in the result. What makes any creative is the creative process itself. It’s in the picking up of the pen, camera, and mouse. As hard as it is to believe, creativity is mostly input.

It’s this notion that has led to the rising popularity of bad art – the kind of art that would not be deemed valuable or noteworthy. While the value of any work is directly connected to the context out of which it is born and could not possibly be reduced to simplistic labels such as bad, one cannot argue that there is a certain freedom to be found in creating something without the pressure of how it will turn out, without the attention tied to it being good.

Bad art, regardless of the critique it might receive and from whom, is simply art that can exist in and of itself, that places more emphasis on the process than on the result. In many ways, Tara Leaver, UK-based artist and teacher, argues, we’d all be better off making bad art, if not for the sole purpose that this implied we’d all be taking time to nurture our own creativity.

For some people, making art that isn’t great is exactly what pushes them to continue. They are free to revel in the fun of it, in the expression of it, in their art being theirs and theirs alone, a vessel for creativity that can improve most aspects of one’s life.

According to Leaver, more people should stop worrying about whether they have the capacity for creativity, and just start, well, making things. Make really bad things, for as long as they want, then wake up and do it again the next day, and the next. What one finds, at the end of the day, is the joy of the practice.

Among the many reasons why creativity has become such a hot topic, there is one that is particularly fascinating: creativity changes the brain. It does so in such incredible ways that scientists have spent years looking into the mechanisms behind it, as well as the possible long-term implications.

While many things we thought we knew about creativity and the human mind – such as the brain having a single creative center, for example -, have been disproven, there are others that we continue to learn about, and that help make the case for creativity becoming part of everyone’s daily routine.

There are few things that speak as strongly for the importance of the creative process as the state of flow. Flow is what happens when one is completely immersed in what they’re doing, and it’s known to reduce anxiety, boost one’s mood, and even slow the heart rate. Experiencing flow repeatedly leads to higher levels of dopamine, which, in turn, increases motivation and the feeling of accomplishment.

What’s more, creativity has been shown to be a useful tool in dealing with stress and trauma, with more and more therapies focusing on the calming effects it has on both the mind and the body, as well as the ways it helps people work through negative emotions.

Given the effects creativity has on one’s mental health, it is no surprise that the benefits would also be noticeable when it comes to physical well-being. Not only are creative activities known to improve cognitive function and strengthen the brain over time, recent studies have shown that practicing creativity, particularly writing, can also boost one’s immune system.

New studies that focus on the effects of creativity on the body continue leading to fascinating results – in 2008, writing has also been shown to help with chronic pain management.

Beyond the artistic aspect, creativity has been proven to be a primary relationship skill. Not only does it help build empathy, it also trains our minds to focus on solutions, and to be able to better understand different perspectives.

Studies have shown that creativity enables people to more easily tap into their emotions, as well as express them, which doesn’t only strengthen partner communication, but also makes one more secure in the way they relate to others.

Embedding creativity into your day-to-day

There are countless benefits to incorporating a creative practice into our daily lives, but as with any new beginning, starting can be daunting.

Rather than concentrating on all the ways in which creativity can seem difficult, focus on making it something you enjoy and truly look forward to. If we’ve piqued your interest, here are some simple tips you could use to start integrating creativity into your routine: 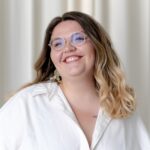 Digital content producer on a mission to tell stories about the things that matter. Currently based in Vienna, Ioana loves exploring controversial topics and writing about all things culture & society.