Nowadays, meditation is widely used as a tool to calm one’s overly busy mind and to find a quiet place to unwind in one’s thoughts. The practice’s ability to generate a lasting positive impact on meditators’ everyday lives is intriguing and enticing.

Every practitioner will be able to report the undeniable mental benefits of this form of relaxation, however, likely only a few people also know about the tremendous physical upsides to maintaining a regular meditation routine.

A deeper dive into the fascinating workings of the human mind.

If we dare to take a step back in time, we realize that meditating isn’t at all a byproduct of a developing and increasingly globalizing world. With chic new yoga labs and dedicated meditation studios popping up all over the metropolises of the world, it can be easy to label this practice as a novel concept that is only now beginning to gain traction and recognition on the stage of spiritual “enlightenment”.

In an interview with Time Magazine, author Lodro Rinzler, also dubbed as “Chief Spiritual Officer” at such a studio in Manhattan, clarifies that this is not the case: “All of a sudden people are saying this can help you, but Buddhists have been saying, yes, we’ve known this for 2,600 years”.

Certain archaeologists suggest that people have been meditating for much longer than a “mere” two-and-a-half-thousand years. Through ancient Indian scriptures, such as the Veda, and wall paintings found in the Indus valley, the origin of meditation techniques could be traced back to as early as the year 5000 BCE. The extensive geographical and ideological network of the Ancient Silk Road played a crucial role in helping meditation spread throughout Asia and soon the whole world.

The notion that meditation is a phenomenon to be found only in Eastern religions is another common misconception that arises when discussing the scope of this spiritual practice. Throughout their respective development, all of the major religions have, in at least some form, integrated meditation, especially in the more mystical wings.

Although the impact of meditation on the physical body is evidently brushed in these ancient scriptures, many questions concerning credibility and accuracy may come to light. Luckily, modern science is well on its way to finding answers to these very queries left unanswered in ancient times.

Mental Balance and a Healthier Brain

Regarded as one of the most thrilling fields of study in contemporary scientific research, the findings respecting the connection between meditation and the betterment of physical, especially neurological, health are striking.

From reducing anxiety, aiding in alleviating depression, and witnessing substantial changes in the grey matter volume of the human brain – meditation seems to be the tool that can work wonders. In this part of the article, we will hence take a closer look at some of the numerous benefits meditative practice can bring about in every one of us.

The term “monkey-mind”, coined by many Buddhist masters and even by His Holiness the Dalai Lama (HHDL) himself, refers to a restless, untamed mind:

“One of the major aims and purposes of religious practice for the individual is an inner transformation from an undisciplined, untamed, unfocused state of mind toward one that is disciplined, tamed, and balanced.”

His Holiness the Dalai Lama

In a recent study, researchers at the University of Southampton and Bournemouth in the UK confirm that this is not only desirable but also highly possible, when meditation is incorporated into one’s daily routine. However, even brief meditation sessions can evoke positive changes: A group of test subjects was given a brief introduction to two different meditation techniques. And the results speak for themselves.

However, meditation does not only impact our conscious state of mind, but also has a noticeable influence on the inner workings of our brain.

With meditation as an active form of “brain training”, it should come as no great surprise that an engaged practice can lead to changes in the actual structure of our brain. Over ten years ago, Harvard scientist Sara Lazar already established a connection between the thickness and size of an area in the brain called the hippocampus, which is in charge of controlling our ability to learn and memorize different things, and a decrease in brain cells in the center for negative emotions such as stress and fear – our amygdala.

The team of scientists was able to link both of these positive developments to mindfulness meditation, which, as the title of the study implies “leads to increases in regional brain gray matter density”.

Moreover, this increase in the grey matter also sees lasting effects on the rate of mental aging.

While a decline in brain function is normally expected to slowly start in people’s twenties, maintaining a regular meditation routine can provide quite a head start: In this very study, neuroscientist Lazar also observed that the mass of grey matter in the brains of 40-50-year-olds with years of experience in meditative practice was nearly identical to that of 20-30-year-old test subjects without any relevant training.

By upholding a steady mindfulness routine, the brain area called the pre-frontal cortex becomes thicker. This leads to strengthening “higher-order” brain functions and decreasing those of a “lower order”. Better decision-making and concentration and amplified problem-solving skills are only three of the countless benefits of an extensively developed pre-frontal cortex.

Self-Reflection and Oneness with the Environment

Staying true to the origins of this ancient practice, Professor Zoran Josipovic, a researcher at New York University, has committed to an extensive study of the brains of eminent Buddhist monks.

In an attempt to dive deeper into the science behind these techniques, Josipovic examined over twenty practitioners in a functional magnetic resonance imaging machine, tracking core indicators such as blood flow.

During his study, the psychologist found that regular meditation played the main role in enhancing calmness and happiness in practitioners – bringing them closer to a state of peace and harmony between them and the world around them.

“When one relaxes into a state of oneness, the neural networks in experienced practitioners change as they lower the psychological wall between themselves and their environments”, Dr. Josipovic explains to the BBC.

However, meditation remains a skill that does not only have to be nurtured but also actively trained: Buddhist monks engage in mindfulness exercises for multiple hours a day, making them devout religious followers and outstanding experts in this field.

So do we actually have the potential and ability to condition and adapt our brain? Yes – but consistency is key!

So, what can you now do to make a lasting impact on your mental, emotional and physical health? To create a flourishing space within the boundaries of your mind?

Well, as you may have guessed, the answer is quite simple: To see flowers bloom, one must plant the seed, water the sprout, and give the slowly growing plant sunlight and diligent attention. And the same goes for your mind: Plant the seed by starting small. 5-10 minutes of mindfulness a day is a stepping stone to build upon. As you go on, you will discover more and more ways to “water” your mind so that it stays fresh and alert – ready to take on challenges and appreciate beauty.

If you want to learn more about techniques you can include in your everyday life, check out Jessica Kotik’s TED Talk “Improving your daily life with mindfulness meditation” or make use of the many (free) meditation apps such as “headspace” or “calm”.

The most important thing? Don’t forget to start!

Reviewed by Sarah Guvi and proofread by Ashley McCarthy 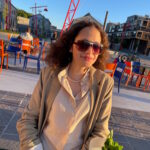