Animal products are undeniably one of the greatest generators of greenhouse gas (GHG) emissions worldwide. The production factors and the gases released from the livestock contribute tremendously to climate change. In this ongoing battle against global warming, people have even taken it upon themselves to mitigate the environmental impacts by making changes in their own lives.

As a result, plant-based diets have seen a surge in popularity. While these diets certainly reduce greenhouse gas emissions, their environmental footprint is not to be ignored. Modern consumers need to further educate themselves on this practice’s implications, thus allowing for a more balanced approach to tackling the environmental crisis.

Not only does plant-based milk emit less GHG compared to animal milk, but it also has many other prominent benefits. The farming of nut trees allows for more carbon to be absorbed from the air and can result in a surplus of wood resources after the trees have grown old.

Over the past years, the demand for plant-based milk has skyrocketed in the international markets. Likewise, its supply, particularly that of almond milk, has doubled between 2000 and 2015, leading to even more industrialized agriculture. This type of production forces bees to pollinate more often than they are accustomed to.

Thus, almond crop mega-farms, such as those in the US, which are the primary exporters of almonds worldwide, have developed strategies for mass production, such as sending bees for pollination even during their hibernation months.

A study conducted recently shows that ‘’50 billion bees – more than seven times the world’s human population – were wiped out in a few months during winter 2018-19’’ as bees cannot cope with the mechanized method of pollination. Moreover, this has also been prompted by the extensive use of pesticides that contaminate the flowers and eventually lead to illness and death among bees.

Furthermore, biodiversity is at risk since increasingly more monitored and strictly regulated agriculture dominates the fields while wildflowers along with other bee-friendly plants and mites that keep them alive are missing from the crops.

Soy milk has also seen an increase in demand over the last few years. Amazonian deforestation owes most of its land operations to soy plantations aimed not only at feeding animals but also at feeding humans. Thus, solely in 2017, around 168,000 hectares (648 square miles) of Cerrado vegetation were cleared up to make space for soybean farming. Nevertheless, it has been estimated that only 6% of the soybean plantations are used directly for human consumption.

Coconut tree plantations are also at fault for causing substantial losses of wildlife in the torrid regions. The great demand for both coconut milk and oil is contributing to the instauration of another large-scale farming operation. As these trees can only be harvested in tropical areas, through agricultural expansion, these farms could lead to a substantial loss of wildlife. In countries such as Indonesia, 80% of the fires were owed to palm plantations.

So what other alternatives are there for us to turn to?

According to a study carried out by Joseph Moore in 2018, global averages show that dairy milk leads the way in its carbon emissions equivalent to a 200ml glass of milk standing at around 0.6 GHG (kg) produced.

Yet, one must be precautious as these evaluations (might) exclude the impact that bee extinction can have on the environment. On top of those, hazelnuts are also a more sustainable choice as they do not require bee pollination but cross-pollination, i.e., the wind carrying the pollen from tree to tree. Moreover, they grow in rainfall areas, thus, not jeopardizing the scarce water resources in the dry climates as almond trees tend to do in regions such as California.

In places such as Europe and North America, most of the exotic fruits are imported. How many people think about the long distance each fruit they buy at the local store travels in order to reach the fruit shelf? How many check the country of origin of their purchased berries?

It goes without saying that many of the exotic fruits such as bananas, papayas, and pineapples are produced outside the US-American and European borders and require long-distance transportation to reach store shelves.

As Joseph Poore, who is a researcher at the University of Oxford, explains: “It’s essential to be mindful about everything we consume: air-transported fruit and veg can create more greenhouse gas emissions per kilogram than poultry meat, for example.’’What is even more concerning is that fruit and veggies that could be produced within most of the European countries are being imported from other large-scale international companies even when some of these foods are still in season.

In addition, data has shown that in the UK, around 100,000 tonnes of food end up in landfills every year. This is not news since everyone in stores frowns upon the brown bananas, which eventually remain unbought. This negligent trend of casting away perishable food can result in ‘‘a waste of embedded emissions.’’

The heated greenhouses have also been shown to contribute to GHG emissions.  A study carried out by the UK Department for Environment, Food and Rural Affairs (Defra), found that heated tomato production in the UK is three times more energy-intensive than the tomato field production in Spain.

This is due to the hot climate that persists in countries such as Spain, while the UK needs to use more fossil-fuel energy to grow food in heated greenhouses. Such data should incentivize customers to understand the importance of buying seasonal and local food.

Scientists have discovered that the agricultural sector is the second greatest generator of GHG emissions worldwide, following that of fossil fuels. According to a study, livestock contributes 14.5% of human-made GHG emissions, thus having a greater environmental footprint than crop cultivation when these are field-grown, require shorter transportation, and are sustainable.

Within this sector, most of the carbon-intensive practices are enteric fermentation manure (emitting methane gas), animal feed production, and land-use change (CO2 losses from deforestation).

Of all livestock rearing, dairy cattle and beef are the most carbon-intensive due to their large-scale farming. Interestingly enough, despite its mega farming, chickens and pigs carry a smaller carbon footprint as they do not release as much methane from enteric fermentation, and their conversion into food for human consumption is more energy-efficient.

As noted above, among environmentally damaging factors of livestock is feed production, which entails deforestation of significant areas of forests with up to 1/3 of arable land dedicated to producing feed for animals. Clearing of forests means habitat loss for already endangered animals and insects, less oxygenated regions and carbon absorption, soil erosion, all contributing to a degradation of our natural complex ecosystem.

Water used for crop plantation is also contributing to water shortages in certain regions. Yet, studies show that ‘‘most of this is ‘green water’ – water that falls on grazing land or on unirrigated crops’’. Water manures have also been shown to contaminate water sources and pollute vast regions. Not to mention the devastating impacts that poor livestock management can have on humans as diseases could be more easily spread.

Although it is highly contested, it has been argued that the sustainable management of livestock can reduce GHG emissions. As animals can produce organic byproducts such as wool and leather which are great alternatives to synthetic fabrics used largely by manufacturing companies.

Additionally, they use the unfruitful land areas and allow many people worldwide (especially in the dry climates in Africa) who have no other source of food or income to live off of besides the animal farms. Livestock can eat the unwanted byproduct foods that humans do not consume, such as food leftover, weed, industrial residue, or even promote increased biodiversity.

Of importance is also the locally-bought food where small local farmers do not adopt a highly mechanical approach to livestock rearing but whose animal husbandry produces seasonal animal (by-)products, thus contributing less GHG emissions into the atmosphere. All these practices can, therefore, conserve an ecological balance.

What is the right way to tackle this issue?

Since, unfortunately, most of the world’s population is clustered in big cities and unable to farm their own food, we must keep relying on others to produce it for us.

This does not mean that there are no right ways to tackle this phenomenon. As unfortunate as this might seem to be, every crop production carries a certain environmental footprint, yet the more conscious we become about our food production, the more we can do to regulate it.

Alternatives to unconscious buying include:

However insignificant this might seem, these holistic procedures can be a step closer to reducing the GHG emissions produced.

It is undeniable that a vegan diet is greener and can prevent the release of GHG emissions if crops are well managed, just as in the case of animal husbandry. Thus, a mindful consumer and sustainable well-managed crops can shift this negative trend and reverse the climate change impacts.

Yet, not many people are aware of the implications of the production procedures of mega-farms. By raising awareness of how our demand shifts the supply curve in the market and how food knowledge can change our choices when buying products, we can make sure that more sustainable food would be available. 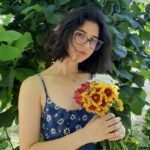 The Invisible: An Interview with Basse Stittgen at TedxVienna UNTOLD

Diving Deeper Into the Oceans