Music and leadership are two things which, at first sight, have little to do with each other. However, upon closer inspection, we may find that they are not so different after all – at least that is what Florian Schönwiese, creator of “The Sound of Leadership” and a speaker at TEDxVienna Adventures Within: Work 2020, showed.

In his TEDx talk, he described his method for workshops to improve leadership skills in people in many different walks of life. His workshops combine his two fields of expertise: business and classical music.

You’re probably wondering how he achieves this. His method basically consists of having a business leader take on the role of a conductor for a string quartet in which Florian himself plays the violin. In the following, the participant gets helpful feedback for their performance and, as a consequence, many essential tips for improving their leadership skills.

After his talk, I had the chance to sit down with Florian for a chat, in which he got to talk about his method in more detail. Read the interview below!

First off, thank you so much for taking the time. Congratulations on your first TEDx talk! How did you feel? Did everything go as planned?

Yes. I was a bit nervous in the beginning, and at times I didn’t say what I meant to say. At least I didn’t get more and more nervous, it was rather the other way round. In the second half, I felt well. I really enjoyed myself, then.

I think it’s very interesting that you created this method at the intersection of business and art. Do you think that’s a connection that people don’t make a lot?

Yes, I realize they don’t. Of course, there are leaders or businesspeople who are interested in different kinds of art, but this is rather the exception. So, it’s quite interesting. For me and in my profession as a musician, we really know that those musicians who are special are interested in so many other things. You know, in history, and in all kinds of arts, and in society and developments in society. This makes a full personality, which you have to be to be a good artist. In other areas, like business, they think that you have to be so specialized and only focused, focused, focused on this one thing – normally, not even on the people around you but on numbers. Still, every corporation, every business, is people.

It’s very striking that we often fail to recognise this connection. Do you think that in general, we tend to see things in neat little boxes rather than everything that we can see?

Yes, of course. In the first place, you think this is safer. Of course, human beings tend to look for safe surroundings. This is, by the way, why we also need strong leaders. That is one of the jobs – to make you feel safe. And jumping out of your box, of course, is not so safe anymore. Suddenly, you might have to open up your personality. Nowadays, when everything is so connected, and you are able to observe so many people, even those who don’t know all those social media things, it can be quite scary to jump over your boundaries, so to speak. Still, it’s definitely worth doing.

Do you think that people in business should be more creative?

Yes, I do. They should just find their own way. Of course, I mean, the only thing that still quite a lot of people do is go running, or into nature. This is one thing which is generally accepted. Then again, I think it’s also important – nature is a very important source for energy, grounding and inspiration. Also, of course, all kinds of arts. I think it’s quite important to find the kind of art that helps you to develop your personality.

That’s very well-said, thank you! Now, something entirely different – obviously, you had so many different people and so many different leaders in your workshops: Do you think that some people are born to be leaders, and some are not really meant for the job?

Definitely, definitely. This is also part of this process. There are quite a lot of people who just don’t feel well being in charge of others. Then again, this crazy system in business is still in place: the best specialist suddenly becomes a leader, and this is a totally different role. In our world [of music], we have to decide already when we study, if we want to be a leader, a conductor, then we study conducting, at the age of 20, or if we become a specialist, so we study an instrument. Then, of course, when you are 20 and want to be a conductor, you realize if it fits for you. This is also part of the process where we work with people. It becomes obvious, if they feel well, if they are meant to do it.

This might be a little of a more fun question. Obviously, people must get really stressed when they are so out of their depth. Has anyone ever quit on you?

No. (laughs) I mean, sometimes, it was on the edge, but you know, it always sounds nice, anyways. Of course, music makes a nice surrounding, to be able to feel well, and then there’s another factor. They can always tell themselves: “Well, I am no specialist in music, so it doesn’t matter.”

Definitely. Is there anything that you didn’t get to talk about in your TEDx talk that you would like people to know?

Well, there’s quite a lot. The interesting thing for me is that this metaphor of the conductor being a leader has so many levels. It’s an organisational one, it’s history and tradition. For instance, an orchestra is a strong hierarchical system which is more than 200 years old, and it hasn’t changed. Still, the role of a leader has completely changed in the last five decades already. From powerful leaders pushing the others to respectful people, communicating on eye-level. There’s so much going on. It is very important, of course, being a leader, that you develop your personality.  This is so obvious in this area. There’s not one same leadership style as the other.

That’s all I have. Thank you so much, and congratulations again on your TEDx talk!

[answers have been edited for length and clarity] 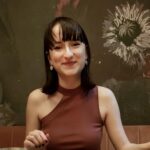 Marie is an English student with an interest in anything to do with culture. When she's not writing, she likes to read, cook and dance (preferably not all three at the same time).