Due to the World Women’s Day on March 8, the whole month seems to be under the theme of emancipation, women and feminism. The perfect opportunity to highlight an extraordinary female photographer – Nan Goldin – who in turn places a very important and sensible topic in the foreground: domestic violence.

Observing Goldin’s photography series means to take a different perspective. She portrays New York’s subculture an LGBTQA+ community of the late 1970s and 1980s in moving pictures. They capture the very events and subjects that are considered outside socially accepted notions of identity, relationships and community. While many of her subjects are glamorous, their circumstances are emotionally harsh. In her photographs, however, she not only reflects her scene, she also reflects herself.

“Nan One Month After Being Battered”

please click here to see the photography this paragraph is about

This is the title of one of Goldin’s most famous self-portrait. Viewers see Goldin herself staring straight into the camera. She would appear well groomed if there weren’t that bloodshot eye and the dark bruises that colour her skin.

It is a unique contribution to portraiture that draws attention to domestic violence against woman and shows the artist herself as both a victim and survivor of domestic violence. The portrait marks the end of a long-term relationship. Nan Goldin explained the situation leading to this image in the book The Ballad of Sexual Dependency:

Most noteworthy Goldin’s photography implies that domestic violence can happen to anyone (and especially any woman). The photo was taken in 1984. All the more shocking today’s violence against women is by no means just a fringe phenomenon.

Currently you can see some of Goldin’s work in the exhibition “MODEL ARBUS GOLDIN” in the  Viennese Fotomuseum Westlicht. Westlicht presents in its exhibition three American photographers whose images expanded contemporary perspectives on society.

In any case, a very informative site for those affected, as well as interested is the site of the association “Autonome Österreichische Frauenhäuser”. Read everything from warning signs of incipient violence relations to statistics and fact sheets on violence against women. It also provides a good overview of relevant institutions where help can be found. https://www.aoef.at

And of course you will also get some information from some of our previous TED Talks:

How we can help end domestic violence 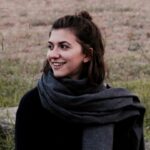 ..currently I'm studying at the University of Vienna trying to strengthen my abilities and to find my passions. A way to implement this is writing.

The Myth of Creativity & Why You Should Make More Bad Art